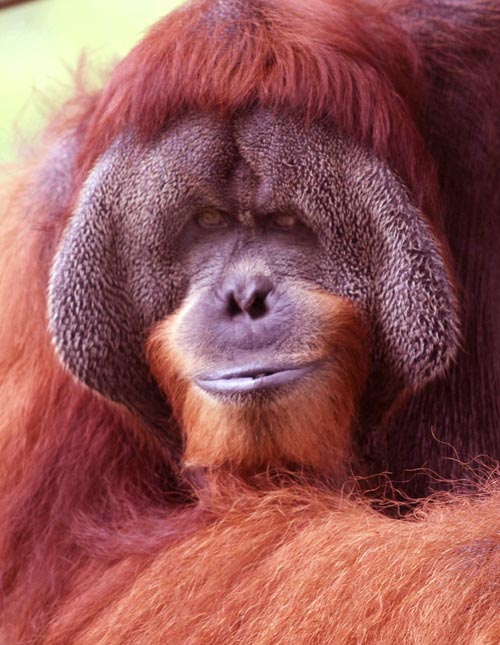 I had not been to the Zoo Negara for a long time. I decided to visit this time as I wanted to photograph some of the animals and birds there. I reached there in the morning at 9am. There was a colorful trailer to take visitors around the Zoo but I decided not to hop on it. Walking around leisurely is the best opportunity to get the best shots.

Zoo Negara is run by a non-governmental organization. They need public donations and funds to maintain their daily expenditures since the day it opened. Zoo Negara is now 45 years old and has matured into a well-known zoo all around the world. It has a total of over 5137 animals from 459 species of mammals, birds, reptiles, amphibians and fish.

I decided to snap some photos of the orangutans. They are originally from Borneo Sarawak and Sabah.The word orangutan means “man of the forest” in the Malay language.

Feeding time starts at 10am and I didn’t want to miss it. I walked straight to the orangutans area and I waited for almost one hour but there was no zookeepers to be seen.

Three orangutans were sitting on a wooden platform that was built on a tree for them to sit on. Ropes were tied around tree to tree but they were lazy to swing with their arms.

I started to take pictures of these three orangutans. Two of them seemed to enjoy the attention as they posed for the camera. The other one is too lazy perhaps she is hungry for food.

I noticed that one of them is old and have a large, bulky body, a thick neck, very long, strong arms, short, bowed legs, and no tail. The orangutans are mostly covered with long reddish-brown hair. 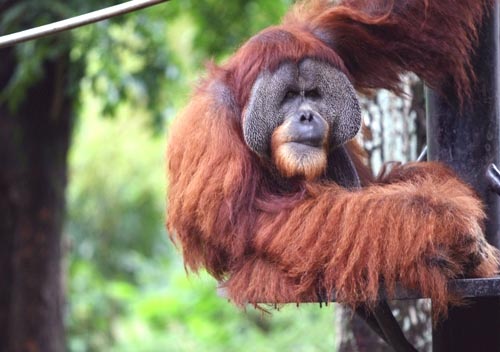 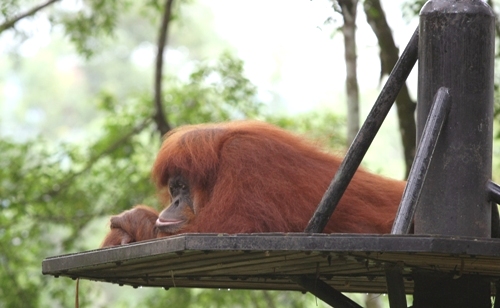 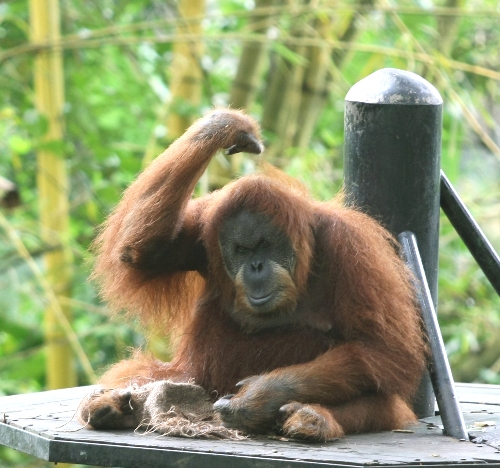 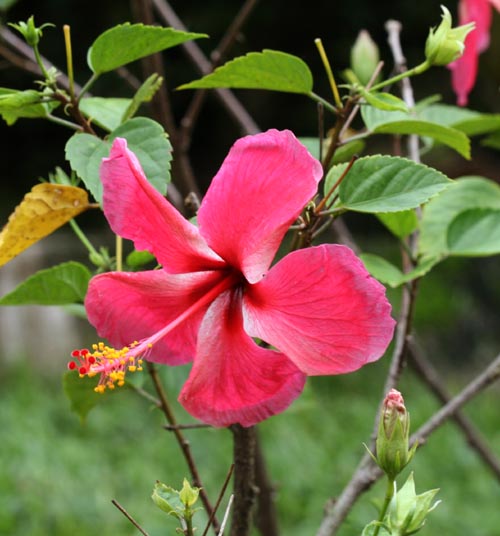 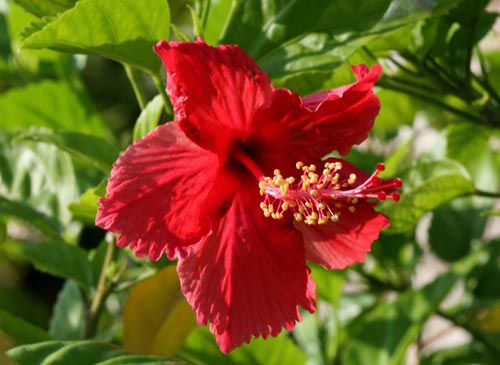 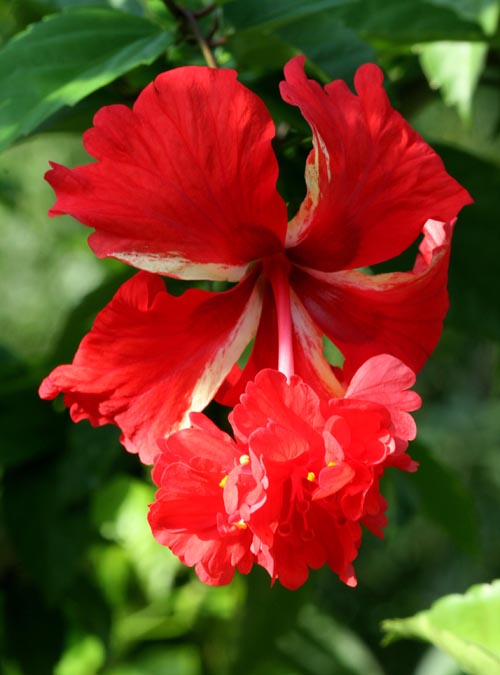 The hibiscus plant can be grown easily, and is found almost anywhere in this country, in public parks, private compounds, pathways or roadsides.

It is also a common home plant. It is grown by cutting and which is simply planted the stem into the soil. It grows quite well in this tropical climate. The year-round rainfall here is good enough to keep it healthy.

It does not require much or fertilizers or care as it is not prone to diseases. However if fertilized it blooms more abundantly and the plant is much healthier with much bigger and greener leaves.

As I strolled in my neighbourhood, I came across this double-flowered hibiscus plant by the road side amongst a row of hibiscus plants. The smaller flower grows above the bigger flower and they share one stigma. Its color and appearance is common except for its double bloom. I wonder if it is a cross-breed or just another specie. It looks different from the Bunga Raya which is planted in our garden. 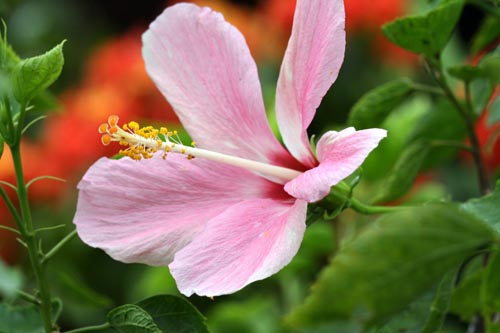 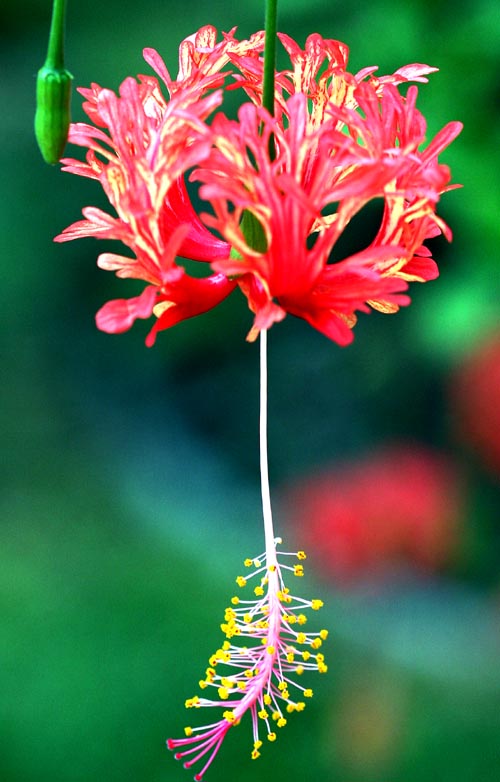 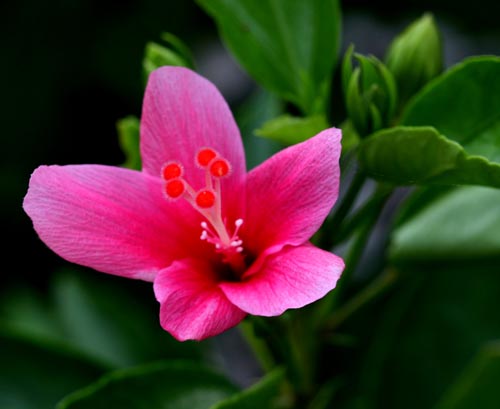 The history of Tropical Hibiscus Flower.

The tropical hibiscus originating in Asia and the Pacific islands, Hibiscus rosa-sinensis is the national flower of Malaysia. It is closely associated with Hawaii, however the state flower for Hawaii is a native species of hibiscus, H. brackenridgei. It is a yellow hibiscus in color.

Real interest in Hawaii developed around the turn of the century. Some plants probably came from China and were crossed with native Hawaiian species. Interest spread to the U.S. mainland and Florida became a center for this interest — the Norman Reasoner family being early pioneers.

Another strong area of organized interest in hibiscus is Australia. It is thought that they were introduced there in the early 1800s, but real interest was sparked later when 30 plants were imported from India for use in the landscaping of Brisbane by its city council. The northern parts of New Zealand also became involved in hibiscus culture.

If in areas with frost, keep your favorite grafted hybrids in pots and bring inside. There are many gardeners who grow all their hibiscus in pots. These people may live in Texas or even Minnesota and Ontario and they find ways to successfully grow and enjoy the tropical hibiscus 12 months a year.

Many of the non-grafted “garden varieties” will come back from the roots if a frost kills the upper plant, but these ARE tropical plants.