Traditionally the Qing Ming  falls on the first week of April and Chinese will go back to attend this Tomb Sweeping Day every year.

The Chinese elderly parents will want the qing ming or  tomb sweeping Day to continue..to give an opportunity for the younger generations to meet and learn to respect the ancestors of this traditional culture.

Three months ago, the permission to remodify the tombs of my ancestors  was granted after consultation with a medium. An auspicious day was chosen and all family members are required to attend the ceremony.

It was for a good  reason that  when  family members  come back to  pay their respects during the qing ming festival, the tombs being restored would prove that the dead are not forgotten by their filial descendants.

Under the medium’s guidance  the ceremony started with the digging of the graves to collect the ancestors bones with much care every tiny piece of bones and the skull of the dead were unearthed and placed into an urn arranged according to position and reburied into the same graves.

Another date was set for all members of the family to attend to witness the new tombs with the medium performing a ceremonial ritual..

Now the qing ming festival is near and all our family members have decided to return to our home near Ipoh on this coming Sunday and we will gather again. Our deceased grandmother’s soul would be pleased to have the children, grandchildren and great grandchildren gathered at the new tombs -rebuild after almost 50 years.

Related article: Qing Ming festival is a time to get together 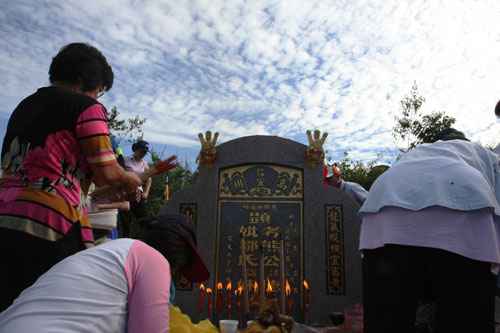